Yeti Cooler – The Cooler to End All Cooler Needs

Posted by miscliisa on May 30, 2016 in Cooking, Gear, Keeping Hydrated | Leave a comment 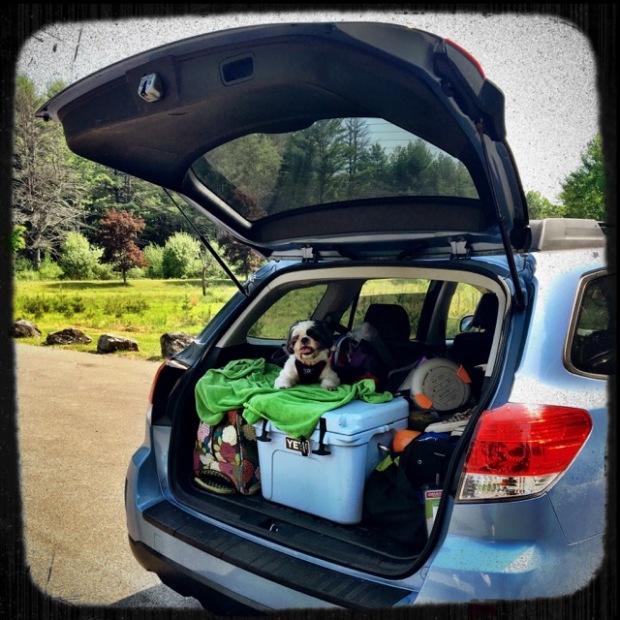 The dog likes to use the Yeti as a perch so he can keep an eye on the camp or the bathhouse or whatever
Over the years, we have had many different coolers and cooler philosophies. There was the plain Igloo and the Igloo on wheels and a variety of soft-sided coolers and then a series of electric ones that plugged into the car or the camper. All of these had their benefits and all of them had issues with actually keeping food cold- particularly when you needed to do that for days on end.
Then a few years ago, we found out about Yeti. Before it became the hipster cooler of the week. At first, we were just freaked out about the price. It was serious expensive. But when we looked back at the amount we had spent on at least one or two new coolers ever season, we realized that maybe it was worth considering it as an “investment”. Surely this heavy-duty thing would last more than a few years.
So we read the reviews. We looked at all the fishing and hunting info out there and at how much those serious outdoors people loved these coolers.
We went out on a limb and ordered one. But we really wanted the pale blue one because the Subaru is pale blue and khaki just isn’t my color and white isn’t the kind of thing that ever stays clean while camping.
At this point, our Yeti is headed into it’s third camping season and showing little signs of wear. That thing is heavy, yes, but it keeps food cold and is awesome.  It’s easy to drain off the water, it’s easy to clean and it is indestructible. We don’t really like to move it much, so it sits in the back of our hatchback so that we can open the hatch and open the cooler. This also means that we have our cold food and drinks along with us whenever we leave camp, so we can refresh our drinks or make a picnic any where.  The food staying in the car is a good thing in bear country. The Yeti is supposed to be “bear-proof”, but I’m not going to be the one to intentionally try that out.
A few tips for using a Yeti:
Yeti Roadie 20 Cooler in Blue
Yeti Cooler Ice Pack